Skip to content
It all starts with a forlorn maiden... one of lowly class... who is desperately in love with one of high status. After having received her love's mother's blessing in her effort to find a way to make the match work, she heals the king of a terrible malady and demands as payment her choice of husband. She, of course, picks her love.

However, her love disdains her for her lack of noble title. After much threatening from the king, he agrees to marriage.

~pauses in telling plot to rant~
FOR HEAVEN'S SAKE, is this maiden (Helena) DAFT? Marrying someone who has been forced to marry you is a recipe for disaster. Resentment, anger, and frustration and going to build up and explode into divorce or worse. BAD IDEA!
~continuing on in telling the plot~ 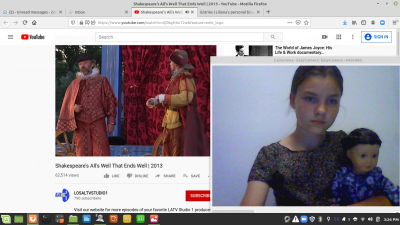 Her love, Bertram, hating his new wife, flees to fight in the war, leaving his wife at his mother's house. Realizing what happened, Helena feels horribly guilty for chasing him "from thy country," and decides to leave in hopes that he will return home and be spared from the horrible war, though knowing that she could never be a beloved wife of his.

Knowing that her husband would not call her wife until she had born him a child, and swearing that would never happen, Helena tricks her husband, bears him a child, confronts him, and says she is his wife.

It's a bit of a confusing romance... and also kinda boring. The best line is at the very end: "Mine eyes smell onion, and I weep anon." Other than that, it was just okay.

And here is Elisabeta's two cents: "We keep doing romances." (rolls eyes here...) "I'm sick of them. We need to do something FUN like Macbeth... or maybe we can go do Julius Caesar again..."

Trackback specific URI for this entry