Skip to content
I made myself a shirt! I LOVE how it turned out. I've already worn it twice, and it's incredible! It's fits well, the fabrics are so soft, and the colors... it's a match made in heaven! And it was for a school project... #TwoBirdsWithOneStone 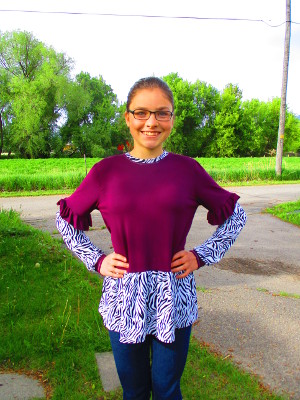 Here is the front!
I did not use the original BIXA pattern; I made view A but added in the lovely ruffles in the sleeves and also the peplum. Altering that pattern was a bit nerve-racking! 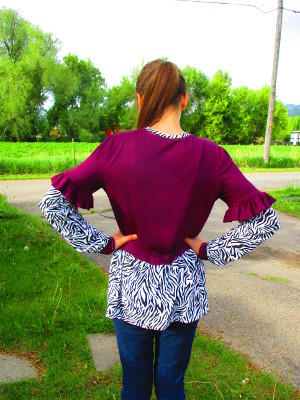 And here it is from the back! I love how the magenta and zebra striped fabric go so well together! 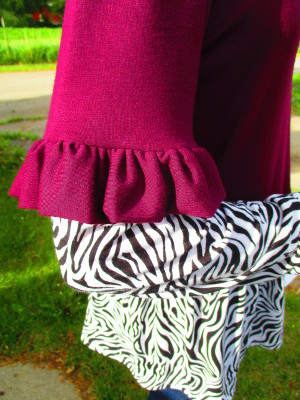 The ruffle -- the most nerve-racking part of the entire project! 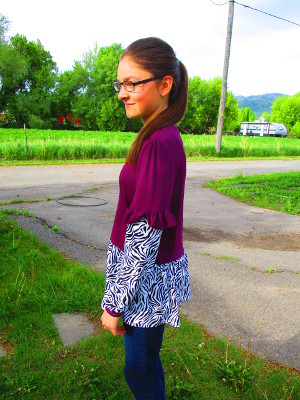 From the side... again, I can't believe how well the two fabrics go together! 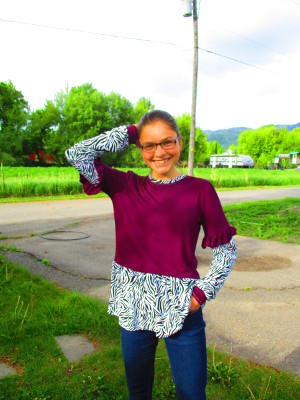 Me as a super model 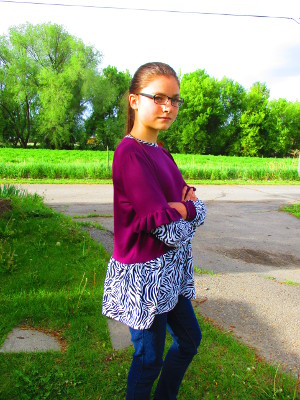 Also me as a super model... 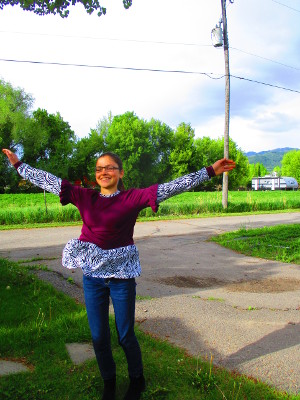 Twirling in my new shirt...


PS. Thanks to my wonderful Mom for taking pictures!
I have six new pieces in my Etsy shop, LilianaKayDesigns!

The first piece is a pink princess-inspired dress for Welli Wishers w/ puffed sleeves and is going for $12.

The second piece is a St Patrick's day dress for 18" dolls; it has a slim skirt with a ruffle and is going for $14.

The third piece is a nautical-inspired dress for 18" dolls; it's made of seersucker, a fabric that's really fun to work with! It's going for $14.

The fourth piece is a basic brown and white plaid dress. It's really cute and going for $13.

The fifth piece is another one for Welli Wishers, but this time it's a deep navy blue. It's going for $12.

The sixth, and last, piece is a jumper for 18" dolls. It's made of a tan and floral-patterned fabric. It's adorable, and I'm SO proud of it! It's going for $12.
Hey guys!

It's been forever since I last posted, which I'm really sad about. Today I am going to share what I've been up to lately.

Etsy
Just today, I added a new listing to my shop, which you can find here. It's for faux-denim dresses with red contrast stitching, designed to fit AG or other similar 18" dolls. It's modeled by Elisabeta, and her friend Jasmine (thanks, Madeline!).

I'm planning on making a lot of spring-time clothes, from floral dresses to embroidered jumpers to skirts and blouses!

And coming soon, hopefully before the middle of March, pdf patterns! I have such fun drafting my patterns, I thought, why not sell some? They could be cheap, and since their digital, it's an instant download, meaning I don't have to ship anything.

Foxtrot
During the in-person days at LAU, I'm taking a ballroom dance class. It's a lot of fun! So far, we have been learning the foxtrot, and now we are starting to learn east swing, AKA triple step swing.

Hinge Point
Another fun thing I've been doing is listening to Hinge Point! It's a new musical group, composed of three sisters, with fantastic voices! Their music is clean, and uplifting, and fantastic!

Brownie bites
Detoxinista has this great recipe for brownie bites. They're super health-nut-ish, but they're surprisingly good! I've probably made them six or more times in the three-ish weeks since I discovered the recipe.
I've added a new piece to my Etsy shop! It's an adorable winter dress with the cutest bird-&-cherry print for 18" dolls. 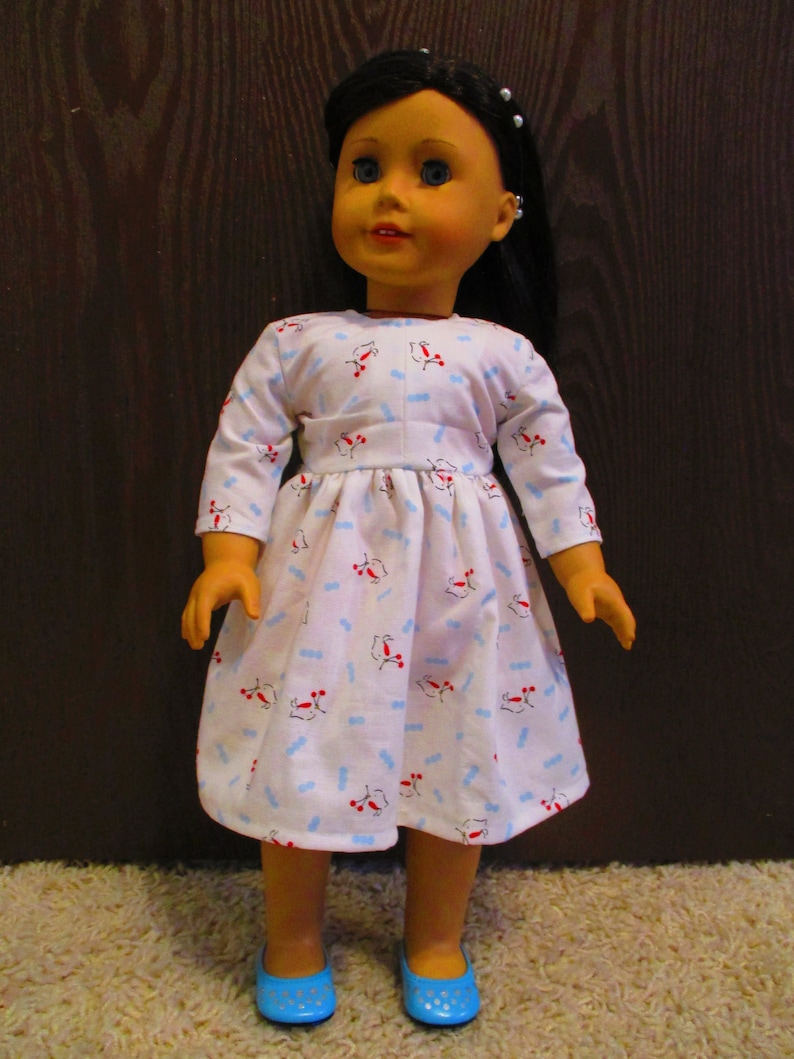 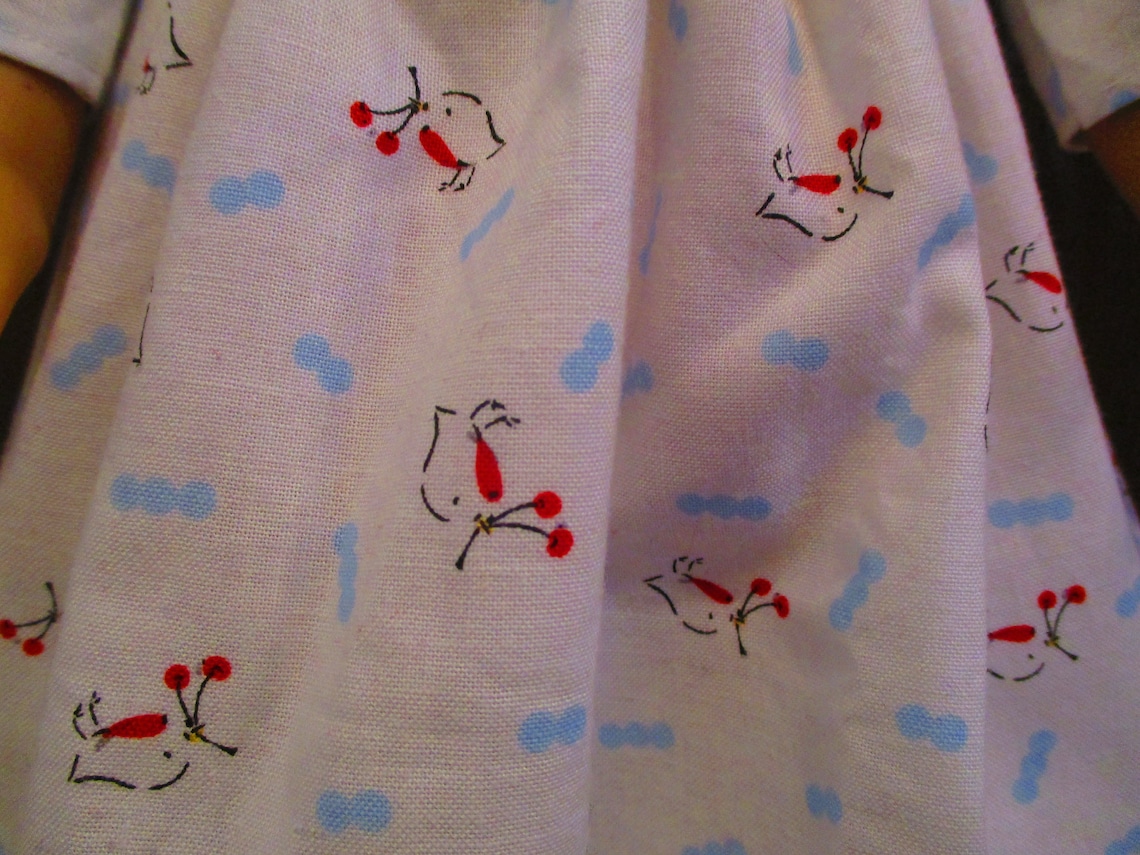 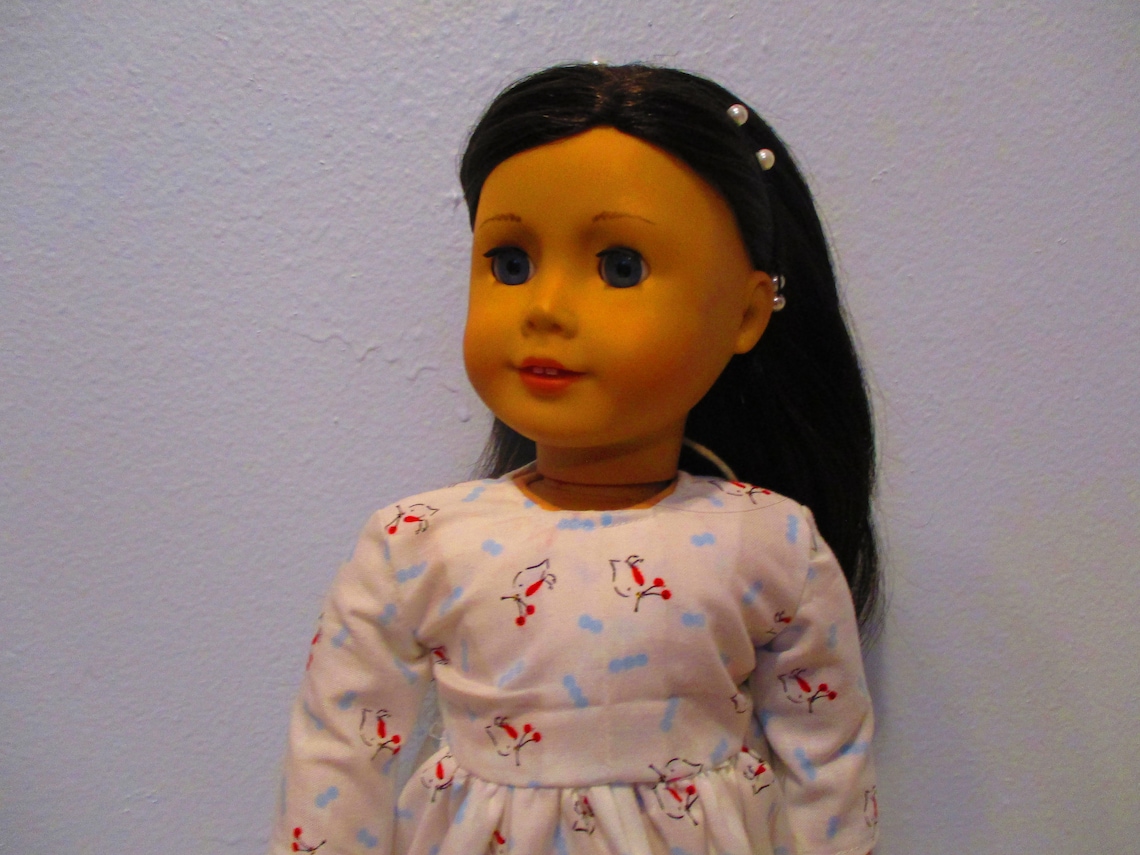 I decided to "splurge" and buy this really adorable Vogue! doll on Etsy. Her name is Jan, and she was (most likely) made in 1959. She is 10.5" tall and utterly adorable! I got her from SweetLilyStudio.

This is the lovely Jan!
Man, it's been a long time since I've posted! And a lot of things have happened.

I've made several garments, crocheted a hat and scarf, tried in vain to crochet a sweater (my problem is I was trying to make up a pattern as I went, since I couldn't find any cute, simple, and free crochet patterns), bought some adorable fabric (for a dress and a twin sweater set), set up an Etsy shop, and felt totally jipped when Governor Herbert made another state wide mask mandate.

Anyways, this post is basically just to say I'm really busy, I want to start posting more, and I have some great crafts planned. So see you later!
Hey guys, long time no see!

Even though I posted just last Friday, it feels like I haven't posted in forever, since I usually post almost daily.

Today I decided to do a fashion shoot with Elisabeta. I took one base outfit (black slacks, white blouse) and used accessories and hairstyles to get different looks out of it.

It was a lot of fun, and I think I would like to do this with myself soon! 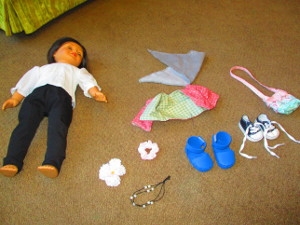 I started with one base outfit and eight accessories: shoes, hair things, layering pieces, bags. 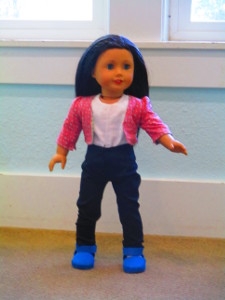 Outfit one: base plus a double-sided blazer, sandals, and a skinny braid in her black hair. 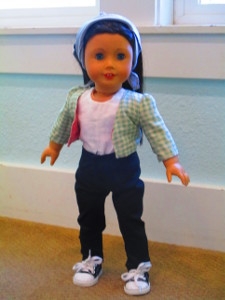 Outfit two: same base, plus the double-sided blazer, her gray scarf used as a headband, and white and black sneakers. 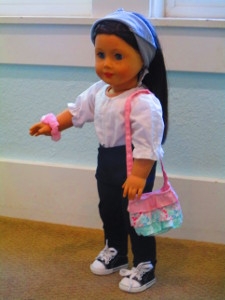 Same base and headband and shoes, now with a scrunchie, and purse. 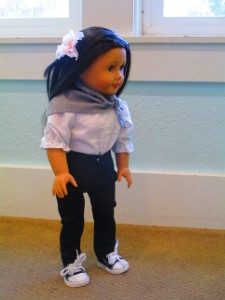 Outfit four: same base and sneakers; now with a floral hair clip, and her scarf tied around her neck. 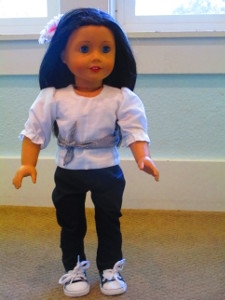 Outfit five: same base and clip and sneakers; now with her scarf tied around her waist as a belt. 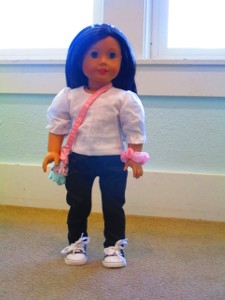 Same base and shoes, now with a scrunchie and purse; in her hair is a pearl headband. 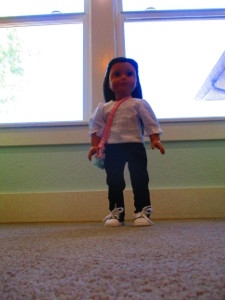 In the last outfit, we have the same base and shoes, and the purse.

Elisabeta says, "Don't I look like I could be the next Madam President? Maybe I should join the 2020 race!"
Hola, folks!

Alright. It's been a while since I've posted... so I'm going to catch you up to date.


Wednesday, July 1
Wednesday was pretty ordinary. I worked on my Camp Na-No-Wri-Mo novel, and wrote about 4,300 words (my goal for Wednesday was 3,716). I ate, I slept, and basically just wrote my novel. Oh, and my bedroom floor was almost clear.

AND I put thorn guards in my bike tires... almost all on my own! ~listens to applause~

Thursday, July 2
Yesterday was sort of an adventure. I wrote in my book (about 2,500 words of my 3,716 words goal), I ate, I drank a lot of water, I did some extra work for money, I weeded in our family's garden.

I also wrote and sent out The Young Scholar's Gazette (a little bi-monthly magazine I do just for fun that I send to a few of my friends), which took me like three hours and is why I didn't make my word count goal.

And then in the evening, I made some doll shoes!


We will now talk about doll shoes.

So, I used a pattern by HappyBankkyCraftyMom and foam I got at HobbyLobby, a hot glue gun, and cardboard I found in our recycling box. 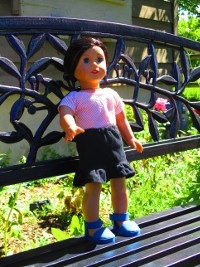 Elisabeta's blue shoes! She absolutely adores them. I think they are her favourite summer shoes.
Okay, so I made a darkish-grayish blue pair first. I really like how they turned out, and I love the pattern! Really easy to use, with a simple and classic design. 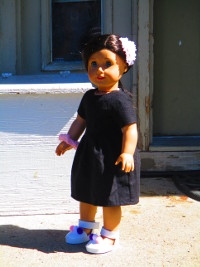 The white shoes are SO impractical, but they're still really cute!
The second pair are white with pom-poms for a fun touch. A bit more playful, they are also not that great to play in because they are white (what on earth was I thinking of?) but that's fine because Elisabeta doesn't really play that much. She likes reading, writing, making sarcastic comments, looking beautiful, and taking naps. She definitely doesn't like mud.
Let it be known unto all ends of the earth, that I, Liliana, do dedicate this day to the making of pants. The cause being, the clothing stores I like are still closed, and I only have one pair of pants that fit me, and one pair DOES NOT CUT IT.

I know that task will be difficult, but I will not quit until I have a new pair of pants that fit me perfectly hanging in my closet.

PS. Weird, right? Well, one has to commit in some way!

After working on pants all day, I have finally drafted the perfect pants pattern! Squee!
I was recently researching "how to start a clothing line" and I came across an absolute gem: French Minimalism. Yeah, it's trendy right now, but that is not why I like it. The whole style is so simple, so put together, so polished! And I love that sort of stuff!

Basically, French Minimalism is a style inspired by (made by) French ladies who look ultra chic. It is based on a wardrobe of tailored clothing, largely in neutral colours. Sound boring? Yeah maybe... but you're forgetting the accessories. The colour, the pop, the pizaz, is added in colourful accessories.

Because I can't really make myself a French Minimalism wardrobe (as much as I want to...) I went for the next best thing and made a French Minimalism capsule wardrobe for Elisabeta. "Hey," Elisabeta says in protest, "What do you mean, second best?" (stands there with hands on hips). Oops... sorry Elisabeta. Rephrase: Because I can't make myself a French MInimalism wardrobe, I chose the BEST option and made one for Elisabeta. "Much better..." Elisabeta says.

I chose a skirt, a pair of pants, overalls, two shirts, a coat, sneakers, and a few accessories and made the following outfits (I could have made many more, but I only had thirty minutes, and each outfit takes about five minutes to put together and photograph): 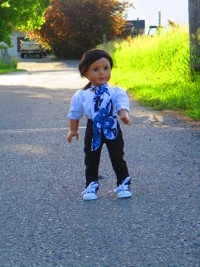 This lovely picture is Elisabeta wearing her black pants, sneakers, white blouse with puffed sleeves, and her scarf. "I look fantastic," Elisabeta says. 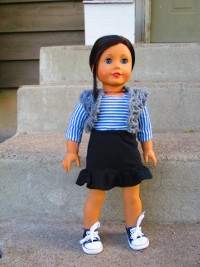 Now she is on the front steps of my home, ready to start a new adventure and a new day. 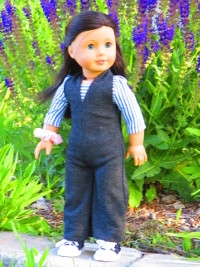 In a stripy shirt and her overalls, Elisabeta looks very nice framed by the purple flowers in bloom behind her. "I look like a goddess in this photo" Elisabeta says approvingly. 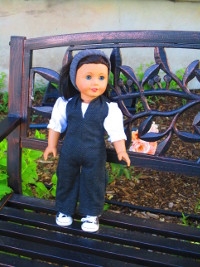 In white blouse and overalls, Elisabeta is standing on the metal bench in our front yard. 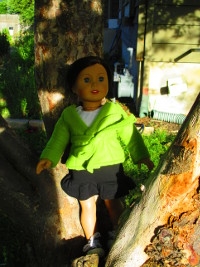 Wearing a short frilly skirt, a coat, and her blouse, Elisabeta is climbing a tree. "Very impractical pose," she comments. "Why couldn't I have done that one in a pair of pants?" 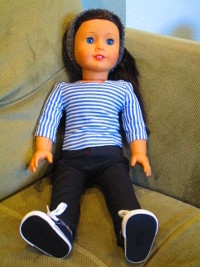 In her stripy shirt and black pants, Elisabeta reclines on the couch. She offers no comment, being mad about what she calls 'poor lighting.'